If you’re any kind of sports car aficionado, you’ve definitely heard about the incredible Mazda Miata. The little spunky sports car from Miata has been popular with drivers for decades thanks to its fun design, exhilarating performance and terrific reliability. But, if you’re looking to get the Mazda Miata, you’ll probably notice that there’s a 2018 Mazda Miata MX-5 and 2018 Mazda Miata MX-5 RF. So, what’s the difference between the two?

The Miata RF is a hardtop convertible that also includes a mechanism for an automatic and seamless conversion from coupe to convertible. The regular, Miata, on the other hand, because it’s a cloth roof, must be converted manually. Because of this, the Mazda Miata RF is also slightly more expensive than its cloth-top sibling.

Does the 2018 Mazda Miata Have Manual a Transmission?

The manual transmission is smaller and lighter, making shifting easier and more seamless than ever whether you’re burning up a straightaway or maneuvering around tight corners!

Want to learn more about the 2018 Mazda Miata and Miata RF? Ready to get behind the wheel of one? Contact our staff at Fairway Mazda for more information or to schedule a test drive today! 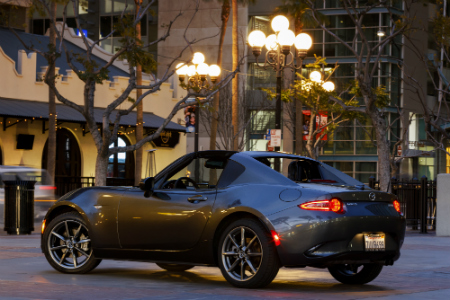 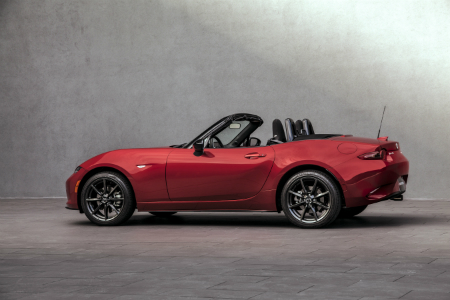 What are the safety features of the 2019 Mazda MX-5 Miata?

This entry was posted on Monday, June 25th, 2018 at 2:49 pm and is filed under Mazda Miata. You can follow any responses to this entry through the RSS 2.0 feed. You can skip to the end and leave a response. Pinging is currently not allowed.

We want to help you find the perfect car that fits your budget. Please adjust the options below so we can estimate the most accurate monthly payments.

How much will you put down?